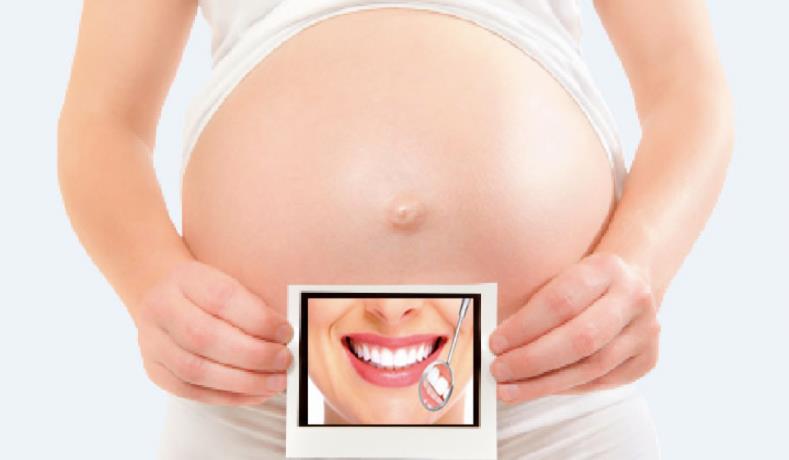 Duringpregnancy hormonal changes can have effects on the gums and teeth, so at thisstage, we must take special care with our oral health. The secretion ofhormones such as estrogen increases 30 times more than normal and progesterone10, compared to what happens in the normal sexual cycle of women. In the secondmonth of gestation the inflammatory symptoms and signs begin, which aremaintained or increased during the second trimester, peak at the eighth month,descend during the last month, and remit after childbirth.

Themost frequent and marked changes lie on the gingival tissue (gums), giving riseto the so-called pregnancy gingivitis, a condition characterized by an enlargedgum, red and bleeding easily; also, the granuloma of pregnancy (approximately 1in 10 pregnant women with gingivitis suffers this disease), which is anotheralteration of gingival tissue in the presence of local irritants. Despite allthese vascular changes, plaque remains the fundamental factor in thedevelopment of gingivitis.

Dentalplaque is an accumulation of microorganisms that adhere to the walls of theteeth, and that survive by feeding on the substrates they find in the mouth andwhen they persist they cause caries, gingivitis or periodontal diseases.

Multiplescientific evidence indicates that poor hygiene before and during pregnancy isthe main predisposing factor to the above-mentioned pathologies. Studiessuggest that up to 18% of preterm births can be justified by the presence ofperiodontal disease and it is considered that between 30% and 50% of these arecaused by infections.

Onthe other hand, pre-eclampsia (the joint appearance of arterial hypertensionand proteins in the urine) is one of the main causes of maternal and neonatalmortality and morbidity. In Spain, this relationship is considered to existbetween 1% and 2% of pregnancies. Women with periodontal disease have 5 timesmore risk of suffering preeclampsia during pregnancy than women who are healthygingivally, 4 to 7% of suffering a premature birth and is one of the maincauses of births weighing less than 2.5 kg. Therefore, we must know that the besttreatment for gum problems, as well as the greater presence of caries, ispreventive treatment.

Althoughthese physiological changes occur in all pregnant women, not all of them havethe alterations described. This is due, in part, to the individual geneticpredisposition to suffer or not certain diseases, as well as to the oralhygiene carried out daily by each of the pregnant women.

–DURING PREGNANCY, DOES THE BABY STEAL THE MOTHER’S CALCIUM AND LOSE TEETH DUETO THE DECALCIFICATION?

Thefirst thing is to understand that the teeth are attached to the jaw bone(mandible) by the periodontal ligament, which is responsible for holding thetooth inside the gum.

Theorganism in the state of gestation produces a hormone called relaxin, whosefunction is to relax the joints of the pregnant woman to facilitate childbirth.Some studies suggest that this hormone can also act in the periodontal ligamentcausing a slight dental mobility that facilitates the entry of food debris andthat the plaque dentobacterial is deposited between the gum and the tooth,causing inflammation of these. This dental mobility caused by this reason doesnot cause loss of dental insertion, and does not require treatment, remittingin the postpartum.

Pregnancydoes not cause bone loss. The total amounts of calcium and phosphorus needed bythe fetus during pregnancy represent only 1/50 of the amount present in thematernal bones. Therefore, the maternal organism suffers very little in thisrespect. Virtually everywhere in the world, there is a mistaken belief thatpregnancy costs a pregnant woman a tooth or more because the baby steals themother’s calcium. What we can affirm is that during the state of gestationthere are changes in the oral tissues and changes of habits that can initiateoral diseases or aggravate the existing ones, increasing the carious activity,nevertheless, studies carried out have demonstrated that, unlike the skeleton,in this state there is no demineralization of the teeth. The enamel has a veryslow mineral exchange, so it keeps its mineral content all its life. Much ofwhat happens in the enamel takes place by replacement of minerals with those ofsaliva and not by decreased calcium. In this sense, it is stated that calciumis not extracted from dental tissue, even though the requirements of thiselement are increased by 33 % in comparison with non-pregnant women.

–“DO WE HAVE A GREATER PREDISPOSITION TO TOOTH DECAY?”

Thefirst stage in the development of caries is plaque, which as we have said isinhabited by many bacteria that feed on carbohydrates or sugars found in ourmouth, and from here produce acids, particularly lactic acid and proteolyticenzymes. Acids are the main cause of tooth decay. Each time sugar is ingested,the acids attack the tooth enamel for approximately 20 minutes, so the acidattack is proportional to the time there is sugar, which explains that it isthe frequency and not the amount of sugar ingested that causes tooth decay. Ifyou cannot brush your teeth after a meal, we advise exceptionally, chewingsugar-free gum, to neutralize the acids. Brushing is irreplaceable for dailyhygiene.

Duringgestation, women are more vulnerable to dental caries. Changes in salivaryproduction, oral flora, diet, among others, are factors capable of producingit. During this period, the salivary composition is altered, the salivary pHdecreases and the ability to regulate the acids produced by bacteria, which makesthe oral environment favorable for the development of these.

Onthe other hand, we cannot ignore that, during this stage, some women modifytheir eating habits (sweet food cravings) and lifestyles (deficiency ofbrushing due to the nausea produced by the practice of this habit), all ofwhich contributes to the accumulation of dentobacterial plaque adhered to thesurface of the tooth. With all these factors interacting with each other, thedental caries succeeds in establishing itself, and in some cases producesdental mortality the infection reaches the dental nerve, we feel pain and we mustendodontize the piece.

Excessivevomiting (due to morning sickness), as well as gastric acids, can cause dentalerosion, lead to a loss of minerals from the teeth and encourage tooth decay.The gums can also be affected. The dentist should be informed of thisphenomenon by applying fluoride to the teeth or recommending a fluoride pasteand mouthwash to prevent this problem. We recommend that as soon as you vomit,do not brush your teeth, as we will drag the remains of acid throughout themouth, favoring dental wear. It is best to rinse your mouth well after vomitingto remove any remaining acid.

“WHATSHOULD I DO IF I SUFFER FROM DENTAL DISEASE DURING PREGNANCY?

Dentaltreatment during the first and third trimesters should be kept to a minimum.They are trimesters where it is recommended to go to the dentist to control theplaque and the general state of the mouth. The second trimester of pregnancy isthe safest time to provide regular dental care. The most important thing is toavoid active disease. The elimination of any focus of infection should be donebefore the pregnancy itself, whenever possible, but if it should arise, itshould be addressed with appropriate measures in any period of pregnancy.

Iftooth decay is established, curative treatment is required, which should notonly be seen from the maternal point of view, but also from the consequences itmay have for the future baby. A study in Finland showed that those mothers whoreceived treatment for dental caries during pregnancy, unlike those whoreceived no treatment, had children with low incidence of dental caries duringthe temporary dentition. This result demonstrates that dental treatment duringpregnancy can affect the development of caries in the child’s temporarydentition, possibly by transmission of immune mechanisms through the placentalcanal.

–IS IT SAFE TO HAVE DENTAL TREATMENT UNDER ANESTHESIA?”.

Lidocaine(anesthesia used in dental treatment) is safe for both you and your baby.

AnAugust 2015 study in the ADA Journal followed a group of pregnant women who hadinterventions using anesthesia such as lidocaine injections and a group who didnot. According to the study, these treatments are safe because they make nodifference in the rate of miscarriage, birth defects, prematurity or weight ofthe baby. “Our study did not identify any evidence that dental treatmentwith anesthesia is harmful in pregnancy,” stated study author Dr. Hagai.“Our goal was to determine if there was a significant risk associated withanesthesia treatment and pregnancy outcomes. We found no such risk.

Medicationuse during pregnancy should be fully controlled by the referring physician.Specifically, the use of chlorhexidine in any of its forms (paste, gel orrinse) is completely safe and can be used during pregnancy if necessary. Itdoes not have synthetic absorption and its antibacterial effects will berestricted to the mouth.

Yes,dental x-rays are safe during pregnancy. Routine check-up x-rays should beavoided during pregnancy. However, in the event of a dental emergency they maybe necessary, with due protection. Dental x-rays are not contraindicated inpregnancy, because the radiation that is exposed to the fetus is minimal.Therefore, there is no risk of teratogenesis (congenital defect during gestation)due to exposure to this type of x-ray.

Yourdentist or hygienist will cover you with a protective apron that minimizesexposure of the abdomen. For this reason, it is extremely important that beforetaking the x-ray it is stated that you are pregnant so that all the necessaryprecautions are taken, since x-rays will only be taken when it is extremelynecessary. In all patients, and especially in pregnant patients, the indicationof the x-ray is done considering the risk of exposure and considering thebenefit it can have to facilitate the diagnosis.

Brushing teeth with fluoride toothpaste is recommended at least twice a day from the first tooth eruption. In children under 2 years with a toothpaste of 1,000 ppm (parts per million) of fluoride “scraped” onto the brush, i.e. the total amount of toothpaste should be the size of a grain of rice. Between 2-6 years, paste 1000-1450 ppm and the amount the size of a pea. Above 6 years, paste with 1,450 ppm of fluorine and the amount of 1 – 2 cm on the brush. The mouthwashes from 6 years, by risk that they ingest it. They must spit it out completely. From this age, the first visit to the pediatric dentist is recommended, since, from this age, they begin to change the milk teeth for the definitive ones. In any case, whenever you notice oral lesions, cavities in baby teeth or you have doubts about how to take care of your child’s oral health, do not wait until you are 6 years old, go to your pediatrician.

The most important goal is to establish a healthy oralenvironment and achieve the highest level of oral hygiene.

All gestational women are prone to changes in their bodies,but this does not mean that all of them have the alterations described hereimplicitly. A good control of the brushing together with an increasing care ofthe oral hygiene, diet, and the periodic oral examination, will contribute todiminish or to control these alterations, reason why we can conclude that thestate of gestation modifies the buccal conditions and affects of this form inthe buccal health, and that the tooth, the periodontal tissues and the buccalmucosa are the direct targets that can be affected by this motive.

The most important thing to prevent caries and gingivitis isto carry out a meticulous tooth brushing with fluoride paste at least twice aday and to carry out interdental hygiene at least once a day. In women with agreater predisposition to caries and gum disease, a fluoride mouthwash andantimicrobial agents should be used.

We recommend a minimum of one visit to your dentist duringyour pregnancy who will control the plaque to minimize gum irritation. Theelimination of tartar, oral cleaning, the application of fluoride to preventcavities and root scraping and smoothing is recommended and can be done whennecessary.